Time for another vote!!

Another way to help raise money for SMA! With another vote, you can add $5,000 more to the efforts the Gwendolyn Strong Foundation is putting forth to find a cure for SMA. You can also post it to your Facebook page after you vote so your friends who supported us in the Chase campaign can jump in and help out once again! (I will copy and paste from Victoria's blog)

I'm no hero. No more so than any parent fighting for their child. But, if I win the "Hero Next Door" contest, that means $5,000 more for SMA research and awareness. And so, I am asking for your vote once again.

Care2 -- the company who hosts our PetitionToCureSMA.com, who has been incredibly supportive of our cause, and who we simply love -- has teamed up with Tom's of Maine to create the Hero Next Door contest -- every day people doing more. We were nominated, along with dozens of others, and here is the neat thing -- we made it to the top 10 finalists! Now this is where you come in...

Here is the breakdown:

* Voting ends February 26th.
* You can only vote ONCE.
* The person with the most votes wins $2,500 for their charity and $2,500 for themselves -- which, in my case, would obviously go directly to research and awareness because there is nothing more important! So that's $5,000 for SMA -- all with a simple vote.
* Technically only one person can win and so "Victoria" is the name you see, but the nomination is clearly for all of us -- including Gwendolyn.

1. Go to: Hero Next Door
2. Click on Vote for Victoria. (It is the green button at the bottom of the page.)
3. Fill out the form (name, birthday, email and zip code).
4. Click on the animal picture (to help stop spammers).
5. And then hit "Vote" and that is it.
6. You will see a big "Thanks for voting for Victoria Strong" to let you know your vote went through.
7. Since you can only vote once, help spread the word by also using the "Tell a Friend" features on Facebook, email and Twitter by clicking on the icons on the right.

And again, all $5,000 will go to the Gwendolyn Strong Foundation to support SMA research and awareness! Thanks for once again supporting us and getting your voting skills out! We are all becoming pros :)

I can honestly say, this woman is a true hero...not only to her beautiful little girl Gwendolyn, but to the many families out there fighting along side her to find a cure for SMA. She and her husband, Bill, received Gwendolyn's diagnosis when Gwendolyn was about 6 months old, and have not laid down and let this beat them - OR Gwendolyn. Instead, they are doing everything in their power to raise awareness and money to end SMA forever. They have a BLOG where many people follow the daily life of Gwendolyn and the goings-on of fundraising and awareness. They have had triathletes competing in a triathlon to raise money, the Unite For The Cure program (they challenged 20 families directly affected by SMA to raise $5,000, and the final total raised was $146,643.70!!! The goal was only $100,000, and they passed that by a mile!), they raised $44k in their Sponsor-A-Mile program where they traveled 4,816 miles round trip in an RV from Santa Barbara, CA to Vicksburg, MS and back to introduce Gwendolyn to her 104 year old great-grandfather (WOW!)! These are just a few things this wonderful family has done. I am deeply touched by their love for their daughter, and their passion to end this horrible disease.

If you need a refresher on SMA, here ya go:

SMA is the leading genetic killer of infants. It is a terminal, degenerative disease that results in the loss of nerves in the spinal cord and the weakness of the muscles connected with those nerves. SMA impacts the ability to walk, stand, sit, eat, breathe and even swallow. The mind and spirit are no different from that of a healthy baby, but the body eventually fails. Typical babies with SMA Type 1 have a life expectancy of between one and two years and they require around-the-clock medical assistance and monitoring.

* SMA is the #1 genetic killer of children under the age of 2.
* SMA is estimated to occur in nearly 1 out of every 6,000 births.
* The gene mutation that causes SMA is unknowingly carried by 1 in every 40 people or nearly 8 million Americans.
* There is currently no treatment and no cure, but the National Institutes of Health (NIH) and the National Institute of Neurological Disorders and Stroke (NINDS) selected SMA as the disease closest to treatment of more than 600 neurological disorders.
* Researchers estimate that we are as close as only a few years away from finding a treatment and/or cure.
* Because scientists know so much about SMA, SMA is considered a "model" disease with direct impact on research into many other diseases potentially benefiting millions of people.

So, if you've got a minute to spare, and I know you do, please follow the link above to vote for Victoria in the Hero Next Door contest. Actually, click here, it will take you directly to the voting page :) It costs you nothing.
If you have another 30 seconds, and I know you do (otherwise you wouldn't be here, reading my blog), then please go sign the Petition to Cure SMA. Everyone in your household can sign it; you do NOT have to be 18 years old.


Thanks for checking in :) 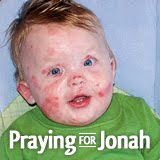